NEAF values the support of its members and affiliates.

You can support NEAF by:

In addition to our Councillors, numerous members of the NEAF ‘family’ volunteer in ways that contribute to research, archaeological materials managements, and the activities of NEAF.

This is the essence of NEAF – that the volunteer efforts of councillors past and present create an environment of activities that:

Meet Some of our Volunteers

Maree Browne –a former NEAF President, has continued to contribute lectures to the NEAF Saturday series, most recently in 2020 ‘Kashgar to Cordoba’ and in 2021 a magnificent lecture on New Kingdom Egyptian royal burials.  ‘Ree has been a tour guide and is currently spending patient hours digitising photographic negatives and slides from past Pella seasons.

Dr John Tidmarsh is one of NEAFs bedrock volunteers – John Tidmarsh is a ‘ Renaissance man’ in many respects. A highly respected endocrinologist, John pursued his dream of archaeology in parallel, completing degrees and a PhD at University of Sydney with particular interest in classical periods, and the era of Alexander the Great and his successors.

He has worked and co-directed at Torone, and in Greece and Paphos/Cyprus. He is a co-director of the Pella Project in Jordan, led by Dr Stephen Bourke.

He has published many books and articles, particularly on the excavations at Jebel Khalid in Syria. And he will soon publish a major work on the Hellenistic and Early Roman periods at Pella in Jordan.

Many NEAF members will know him as a past President of NEAF, and is one of our hardest working volunteering tour leaders. His tours to Iran and Greece are legendary, and have inspired many NEAF members to support archaeological research.

With Maree Browne, John made the NEAF Saturday Series an institution we continue today.  John has lectured regularly for NEAF and continues to be a supporter.

Jack McBride and Sue Walden have for many years been our NEAF librarians.  Books donated to NEAF are carefully managed in the CCANESA Library.

Donations are valued and appreciated.  We understand that any contribution made to NEAF is an expression of support and we thank you most sincerely.

People have been extremely generous, especially during the COVID pandemic in 2020/21 when we faced the loss of Tour income which normally comprises at least half of our annual revenues.  Our lecture and seminar programs have been very well supported and while people can’t travel, members and friends have been strong patrons of our online events.  Thank you to those who subscribe to our events, and also to those who choose to make a voluntary contribution to free events.

People have also been generous in their support of the Pella Project. Two seasons have been cancelled due to the COVID pandemic, yet the Pella Dig House and key local resources continue to need support.  Thank you for the contributions to ‘keep the lights on’ at Pella.

Some of our major donors have been familiar faces to those who have been NEAF members for many years.  To continue to honour their commitment to NEAF, you can learn more about some of our generous supporters here

If you would like to make a donation to NEAF, or plan a bequest to NEAF, click here.

In mid 2021, NEAF was contacted by a representative of an Anonymous Donor who wished to make a gift of $25,000 to the Pella Excavation Project, working under the NEAF umbrella. The elegant purpose was expressed to be “to support the work of the Pella Project”, a most generous and timely offer of support. NEAF will work with the Director of the Pella Project, Dr Stephen Bourke AM to ensure the Gift is employed as the Anonymous Donor wished.
Make a Donation

The Foundation has established the J. Basil Hennessy Fund to celebrate the life and works of Basil. It will be used to remember Basil and to continue his interests in Near Eastern archaeology and his passion of passing knowledge to a new generation of scholars.

NEAF has established a fund in honour of Judith McKenzie whose outstanding work in the Near East and her commitment to the Manar Al-Athar Project. We will use these funds to further those interests and promote her legacy for students of the future.

So that we can keep track of donations specifically targeted to the J. Basil Hennessy Fund and the Judith McKenzie Fund, could you please either:

Use the on-line donation link but please send us an email to alert us to the fact that you intend your donation to either of these important funds.

NEAF gratefully receives bequests from both members and the general public where these bequests can both be administratively accommodated by NEAF and are deemed a useful addition to foster NEAF’s aim of furthering study and participation in Near Eastern Archaeology. 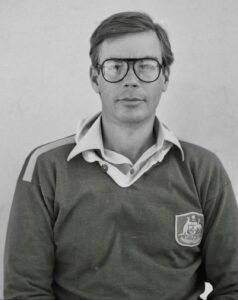 Everything NEAF does, every day, owes an extraordinary debt to Jon Hosking, whose generous bequest in 1989 is one of NEAFs key financial anchors.

Jon Hosking was an enthusiastic Member of the Foundation and Founding Managing Editor of the NEAF Bulletin, as well as a member of the first Pella field team in 1979.

I first met Jon in my second year of Archaeology.  Jon was a Qantas crew professional, whose parallel passion was Near Eastern archaeology, particularly classical archaeology and numismatics.  While he had never had the chance to do an Archaeology degree, his years of travel had ignited his private interests and he was a voracious reader and self-educator about the archaeology and history of the Near East and Mediterranean.

Jon was to be one of the University of Sydney Pella team in its first season in 1979.  I was to be a draftsperson – and so we met.  Jon was hardworking, gentle-mannered and good humoured even in the most trying moments when roofs leaked, and the dreaded Generator failed to start.

On that pioneering Qantas flight to Damascus (our first leg of the inaugural Pella journey), we cash-strapped student diggers down the back of the 747 were delighted mid-flight to be offered complimentary champagne by cabin staff - worded up by Jon!

Jon passed away in October 1989, at the age of 44.  He showed courage and grace throughout his long illness, never letting an opportunity go by to offer time and assistance to Basil Hennessy, Tony McNicoll and NEAF.  He loved the University of Sydney archaeology and NEAF communities and the chance it gave him to express his interest in research and share our work in Jordan.

His six-figure bequest to NEAF was a very considerable sum, and with time and growth is now the engine room of slightly less than half our funding base.

Part of Jon’s original donor purposes was the study and publication of his personal coin collection, and support for a revised edition of the BM catalogue of the coinage of Cleopatra VII.  These key elements of the bequest were all met in the early years after his bequest. 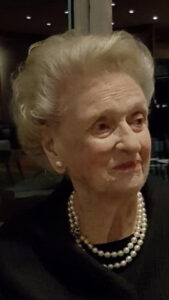 Lady Winifred Grace Stephen affectionately known as Win was fascinated by the ancient world, and went on a series of trips to various countries in the Middle East, led by NEAF tour leaders.  Along with her daughter Mary, she participated in more than thirty (!) short courses (mainly through NEAF) in Archaeology and History. However, in typical fashion, she wanted to give something back to those institutions that had given her so much pleasure. Thus, aged in her late 70s, she ‘got a new job’ two days a week, volunteering in the Nicholson Museum. She began by stuffing envelopes, and moved on to reconstructing shattered pots, learning how to support the glued pieces in sand. She loved these days, and she loved the archaeologists, NEAF and the Nicholson Museum.  She also spent many days helping Karen out in the NEAF office, mostly stuffing envelopes and writing up some catalogues. For her, the archaeologists were dear friends and she felt privileged to be able to work among them. Even more privileged were all of us who knew her—either as a friend, travelling companion, or volunteer in the NEAF office or basement of the Nicholson Museum—for with her enthusiasm (age being no barrier), gentility, and selflessness Win was a real inspiration to so many. She bequeathed NEAF a sum of $10,000 to be used in the support of NEAF’s various activities.

Christopher Martin Caley was born in Katoomba on the 27th September 1948. 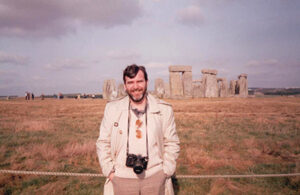 He learnt to read at an early age, and soon became an avid reader with a wide variety of interests which include reading the dictionary cover to cover before he had finished junior school- indeed an academic in the making. He graduated from Sydney University with a BA (Hons) and an LLB with Distinction, and set forth on a long and successful career in Law.

Whilst Law was his trade, his keen interest in history had by this point developed into a passion for ancient history, archaeology, and anthropology.

With his formidable command of languages – English, French and Latin – combined with an insatiable quest for knowledge in his specialised interests, he accumulated an extensive library of specialty books ranging from English Literature, poetry, history, law and archaeology.

In 1980s he participated in a three month dig at Qsar Ibrim on the Nile, Egypt with Cambridge University as their leather expert, and travelled extensively to many of the worlds key archaeological sites across Europe, Asia, and the Middle East. It is no surprise that he went to complete his Masters of Letters with a research piece being titled Angling for Old Bones.

Chris was a man of quick and dry wit and he was much loved and highly regarded by his peers. Even post-formal studies, he remained a lifelong academic, with his passion for learning leading to this collection of books.

He is survived by his wife Twee, mother Freda , his three children and brother Pete.

NEAF is extremely honoured to receive Chris’s collection of books for inclusion into the CCANESA library where we are sure they will be a welcome addition for students and scholars alike.

In 2020, a bequest was received from NEAF Member Kevin Hayes who passed away on the 15th April, 2021.  Mr Hayes had been a keen traveller and participant in NEAF activities, including a NEAF Tour conducted by Dr Tidmarsh to Syria in 2009.

Mr Hayes bequest of $150,000.00 will be used to support research and activities consistent with the inspiration he took from his rich experience of Near Eastern and Levantine archaeology and history.

Werner Horn was a member of the Foundation since 1988.  From Krefeld in Germany, he arrived in Melbourne as a young man and then came to Sydney, which became his home for the second half of his life. He completed a BA at UNSW, while taking some courses at University of Sydney.

When Werner Horn died on 22 July, 1992, he left a bequest of $10,000 for NEAF sanctioned library and NEAF publication support.